FarmBot’s camera must be calibrated so that images can be scaled, rotated, and positioned such that the pixels in the images match up with the FarmBot coordinate system. This allows images to be displayed in the farm designer map with the correct location, size, and rotation. Calibration also allows FarmBot to detect and locate objects in the garden, such as weeds. 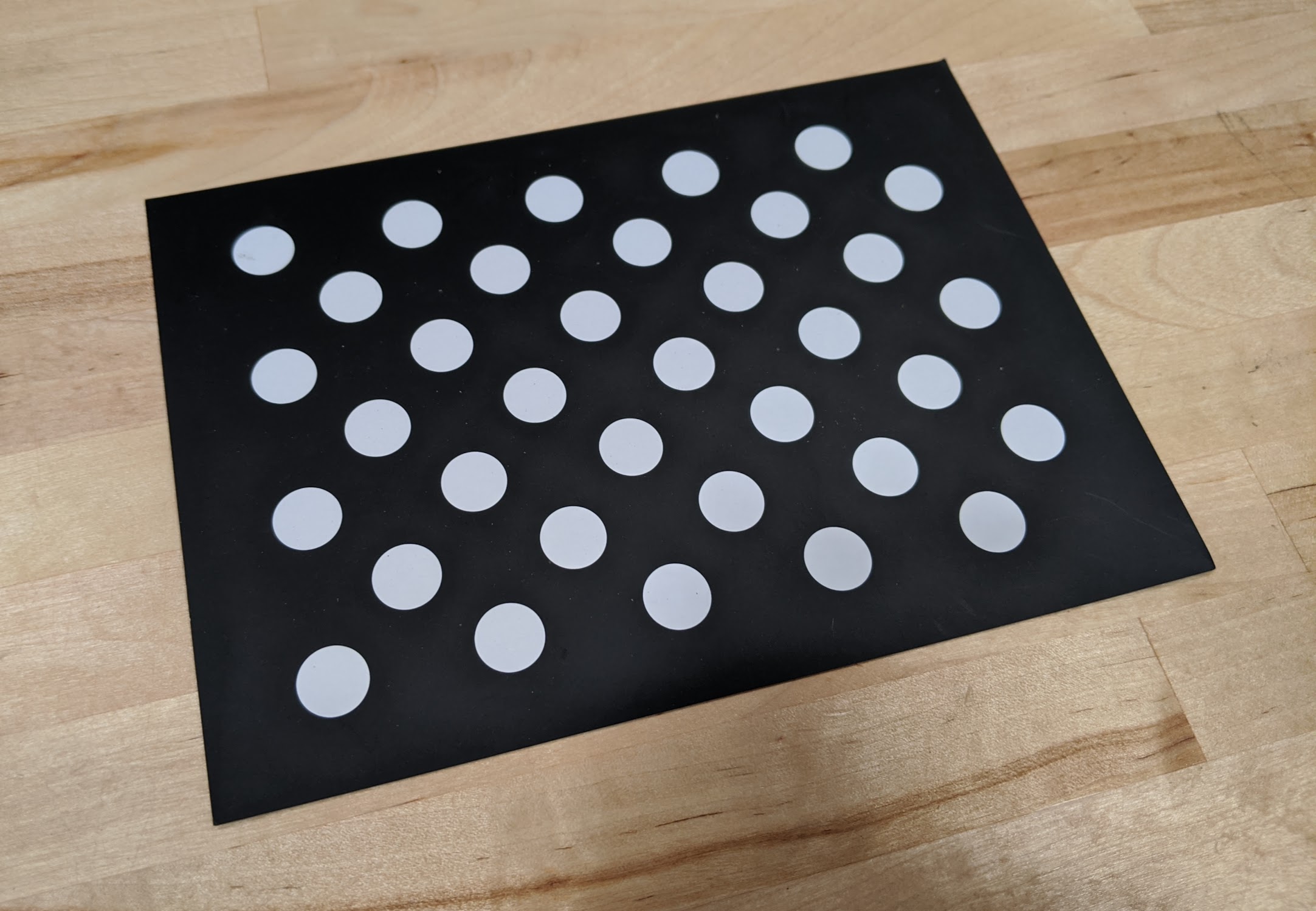 Step 1: Place the card in the bed

Place a thin, large, and solid-colored surface (such as a piece of cardboard or cloth) on top of the soil away from the edges of the FarmBot bed. Then place the camera calibration card in the center of the solid-colored surface with the dot grid facing up. Orient the card square with FarmBot’s axes and ensure that it is flat and facing perpendicular to the camera.

From the controls panel, move FarmBot so that the camera is positioned directly over the camera calibration card and raise the z-axis as high as it will go. Now open the photos panel and scroll down to the camera calibration section. Expand the section and press the calibrate button. FarmBot will take a photo, then move 50mm in the +Y direction, take another photo, move 50mm in the +X direction, take a 3rd photo, and then move back to where it started.

This process may take up to 3 minutes to complete on FarmBot Express devices, and up to 2 minutes on FarmBot Genesis devices. Watch the status ticker for progress updates.

Once calibration is finished, FarmBot will upload the resulting calibrated image as well as calculated values for ORIGIN LOCATION IN IMAGE, PIXEL COORDINATE SCALE, and CAMERA ROTATION.

If FarmBot is unable to detect the dot grid in any of the images, it will upload the problematic image and then move back to where it started. Inspect the image and make adjustments before retrying calibration. There are several common reasons FarmBot will not find the dot grid:

Outside the field of view

There must be good contrast between the white dot pattern and black calibration card background for calibration to complete successfully. If the lighting in the image is too bright, too dim, or nearby trees are casting shadows in some areas of the card but not others, then FarmBot will have trouble detecting the dot grid.

To increase lighting, try toggling ON FarmBot’s LED light strip or waiting for another time of the day to try calibration.

To decrease lighting and ensure there are no interrupting shadows, try waiting until another time of the day when the garden is fully shaded. You may also try in a different location in the garden bed.

After camera calibration, photos taken of the garden should line up with the grid when shown in the farm designer. If locations such as plants appear offset in photos when compared to the corresponding map locations, CAMERA OFFSET X and CAMERA OFFSET Y can be adjusted until they match.

Once camera calibration is run, you must always detect weeds with the camera at the same height (z-axis coordinate). Running calibration with the z-axis all the way up is recommended to maximize the camera’s field of view.