To use this method, check USE ALTERNATIVE METHOD in the camera calibration panel.

Step 1: Place the calibration objects in the bed

The objects can be placed anywhere in the bed, but they need to be placed square with FarmBot’s coordinate system and in a location where FarmBot’s camera can be moved directly overhead. The objects should be separated about 100mm or more apart, but they must both be within the field of view of the camera.

Measure the distance from the center of one calibration object to the center of the next and input this distance in millimeters into the CALIBRATION OBJECT SEPARATION field.

The distance between the two red dots on the Genesis v1.5+ and Express v1.0+ camera calibration card is exactly 100mm.

For the ORIGIN LOCATION IN IMAGE setting, look at a photo you have taken with FarmBot’s camera (take one using the take photo button if you haven’t already). Determine which direction home is in the image, and select the corner of the image that corresponds to that direction. It can help to view a photo taken when FarmBot was at home (0, 0, 0). If a corner of the image does not correspond to the origin, try rotating the camera until one does.

For FarmBot to find the red calibration objects, it needs to know which shades of red to look for. The HUE color range slider should be set to approximately 20 to 160, with the INVERT HUE RANGE SELECTION checkbox marked. This will select a hue range that includes various shades of red. 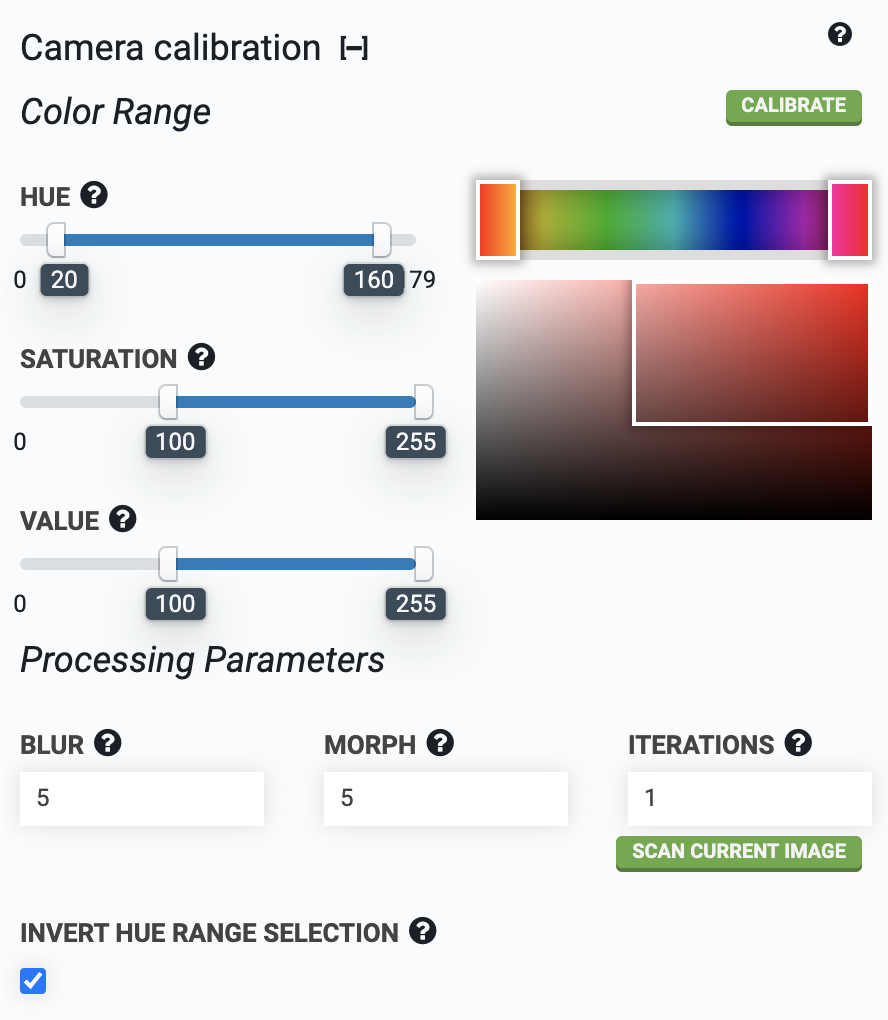 Move FarmBot directly over the calibration objects and raise the z-axis as high as it will go. Press the calibrate button and watch the status ticker. Once calibration is finished, FarmBot will upload the resulting image as well as calculated values for PIXEL COORDINATE SCALE and CAMERA ROTATION.

The scan current image button can be used to run camera calibration on an image already taken instead of taking a new photo.

After camera calibration, photos taken of the garden should line up with the grid when shown in the farm designer. If locations such as plants appear offset in photos when compared to the corresponding map locations, CAMERA OFFSET X and CAMERA OFFSET Y can be adjusted until they match.

Once camera calibration is run, you must always detect weeds with the camera at the same height (z-axis coordinate). Running calibration with the z-axis all the way up is recommended to maximize the camera’s field of view.