Below are descriptions of the basic commands you can use in a sequence. When using the web app, hover over the icon in the top right of any sequence step to view usage information. 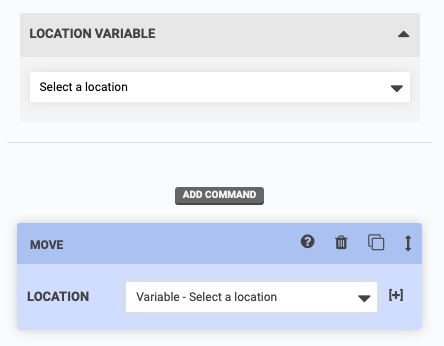 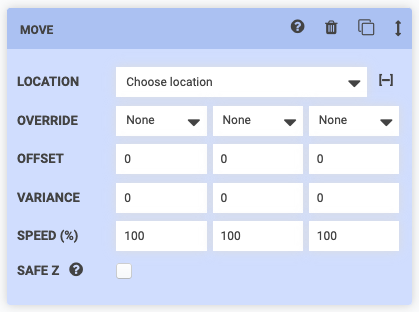 OVERRIDE allows you to override the X, Y, and/or Z values from the LOCATION field with new values. You may type in a custom coordinate, a formula, or disable an axis entirely. The Z axis override dropdown also includes a special Safe Height value. Currently the Safe Height is set to Z = 0, though this will be customizable in the settings panel in the future. Coming soon is a Soil Height option. 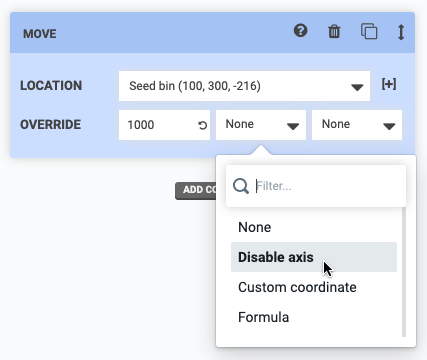 The Control Peripheral command allows you to control peripherals such as the vacuum pump, solenoid valve, and lights. To use this command, first select a peripheral from the PERIPHERAL dropdown. Options include:

Next, select the MODE which you would like to control the peripheral with. You can choose either Digital or Analog.

In the sequence editor options menu ( icon next to the copy sequence button), there is an option to SHOW PINS. Enabling this setting will show additional options in the PERIPHERAL dropdown for all of the Arduino’s raw pins. If you have hooked up custom peripherals to any of the Digital Out or Analog Out pins on your electronics board, this is one way you can control them from a sequence like any other peripheral.

Under the hood, most peripherals are just pins

Remember in the controls panel how you defined your peripherals with a name and pin number? That’s because at the microcontroller level, those peripherals (vacuum pump, etc) are hooked up to a specific pin on the Arduino. Giving them a name just makes them much easier to work with here in the sequence editor.

The Toggle Peripheral command allows you to toggle the state of a digital peripheral. For example, if a peripheral is currently ON, and then FarmBot toggles that peripheral, it will get turned OFF.

To use this command, select a peripheral from the PERIPHERAL dropdown. Options include:

Next, select the MODE which you would like to read the sensor with. You can choose either Digital or Analog. Use digital for a 0 (LOW) or 1 (HIGH) response, and analog for a reading between 0 and 1023 for 0-5V.

Last, optionally provide a DATA LABEL to allow your recorded sensor reading to be more searchable at a later date.

In the sequence editor options menu ( icon next to the copy sequence button), there is an option to SHOW PINS. Enabling this setting will show additional options in the SENSOR OR PERIPHERAL dropdown for all of the Arduino’s raw pins. If you have hooked up custom sensors to any of the Digital In or Analog In pins on your electronics board, this is one way you can read them from a sequence like any other sensor.

Under the hood, most sensors are just pins

Remember in the sensors panel how you defined your sensors with a name and pin number? That’s because at the microcontroller level, those sensors (soil moisture, etc) are hooked up to a specific pin on the Arduino. Giving them a name just makes them much easier to work with here in the sequence editor. 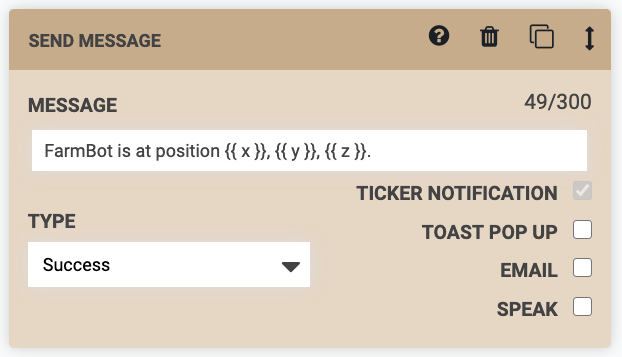 The If… command allows FarmBot to check if a condition is true or false and take an action based on the results. This allows for smarter, condition based farming, and for gracefully handling errors and failures.

The Execute Sequence command uses existing sequences as steps in a new, larger sequence. This allows you to re-use smaller, simpler sequences in different combinations to create far more complex sequences that are easier to modify, manage, and mashup later because of their modularity.

You can drag and drop existing sequences from the sequences list into an open sequence in the full sequence editor to add an Execute Sequence step with that sequence selected.

The Run Farmware command instructs FarmBot to run a farmware. To use the command, select which farmware you would like to run from the PACKAGE NAME dropdown. Or, select Manual Input and type in the name of the package, for example, plant-detection.

The Detect Weeds command instructs FarmBot to take a photo and run the weed detection software. After taking the photo and processing it, FarmBot will upload it to the web app, along with the coordinates from where the photo was taken, the date and time. FarmBot will also add any weeds that it identified to the PENDING category in the weeds panel.

The Take Photo command instructs FarmBot to take a photo with the USB camera or the Raspberry Pi camera (whichever is selected in camera settings). After taking the photo, FarmBot will upload it to the web app, along with the coordinates from where the photo was taken, and the date and time.

You can view the photos taken on the photos panel and in the farm designer.